Racquetball player Paola Longoria won three gold medals at the Pan American Games in Peru in August – in singles, doubles and in the team competition. She won each of the three gold medals for the third consecutive time, following her triumphs in Mexico in 2011 and Canada in 2015. The Mexican is also a two-time champion of The World Games, having won in Kaohsiung and Cali (Racquetball was not on the programme in Wroclaw in 2017). More than deservedly, she is The World Games Athlete of August 2019!

Paola Longoria is a super-star in Racquetball. She began playing Racquetball at a summer camp when she was eight years old. Longoria says she is hyperactive and loves several sports, including tennis, gymnastics, football, and basketball. “But with Racquetball it was love at first sight! The ball was faster than the other sports and was practised in a closed place, so I decided there and then it would be the sport to which I would dedicate my effort and passion. When I was 9 years old I qualified for my first Youth World Championship, and so began my journey.” Since then, she has conquered the world, with four individual and four doubles gold medals at the IRF World Championships, and with great success at The World Games, several Regional Games, and more.

After her third consecutive win at the Pan American Games in August – which made her one of the most successful athletes ever at the Games – Longoria said:

Each win has a special meaning for me. Guadalajara in 2011 was my Pan American Games debut. The Racquetball complex was full of Mexicans who supported me. In Toronto I was the flag-bearer for the delegation. It was double motivation and pressure to win gold. Today, in Lima, was my best moment in sport and is one of the happiest days of my life.

In 2010, Paola Longoria was awarded Mexico’s National Sports award, and in 2013 her name was added by Forbes Magazine to the list of the Top 50 Most Influential Women in Mexico. This month, she was elected to the Panam Sports Athlete Commission alongside four others. The 30-year-old was voted to sit on the Panam Sports Athlete Commission by her peers, with a record 1,838 athletes voting for 5 out of 13 candidates during the Games. The new members will have an eight-year term on the Commission.

While she loves Racquetball, Longoria has a very clear view that sport is not the only thing in life. Therefore, while training and competing at elite level, she has also finished her studies in Mechanical Engineering and become an MA in Political Science. 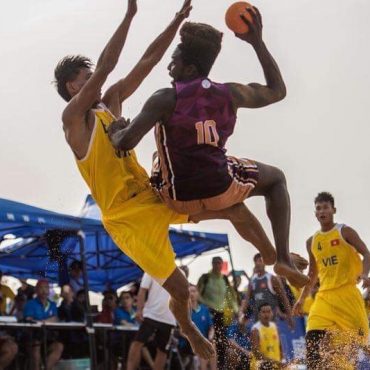 Learn more about the sport of Handball from the “Handball Ninja” himself – Ebiye Jeremy Udo-Udoma!