Individual World Champion for the last four years and since 2014 in the couples category with Rebecca Tarlezzi, Luca Lucaroni is undoubtedly one of the most brilliant stars of Artistic Roller Skating. At the World Roller Games in July, which featured the World Championships for Roller Sports, he won gold in both of his disciplines. More than deservedly, he is The World Games Athlete of the Month!

At the World Roller Games, Lucaroni made artistic combinations of maximum difficulty, enabling him to keep in first position and distance himself from his rivals. At the end, he took clear victories in both single and couples classes.

At 24 years old, Luca Lucaroni has become a practically unbeatable skater in the individual category, and much more than that, also in a team with his irreplaceable partner Rebecca Tarlazzi, aged 20. It was in the 2014 World Cup in Reus that they began their reign in pairs.

The secret is  the rapport. We are like brother and sister, and we never argue. And when one of us is in low spirits, the other provides encouragement.
Each day they train for between six and seven hours, half the time alone and the rest together.

In early 2018 Lucaroni’s trainer, mentor and friend Gabriele Quirini lost his life in a traffic accident. In the end, thanks to the support of his family, friends, Rebecca Tarlazzi, and Luca D’Alisera – former world champion also trained by Quirini – Lucaroni found the strength to continue skating, winning the title of World Champion in the Artistic World Championships of La Vendee.

Lucaroni says that the key to staying so long at elite level in skating is perseverance.

Skating requires a lot of sacrifice​ and a lot of passion. You have to work hard and dedicate many hours to it, but above all, you have to have fun. If you do not have fun skating, you will never reach the top – and I do have a lot of fun skating he says. Luca Lucaroni will receive The World Games Athlete of the Month diploma as well as a branded gift from the Official Sponsor of Athlete of the Month, Protective Life. 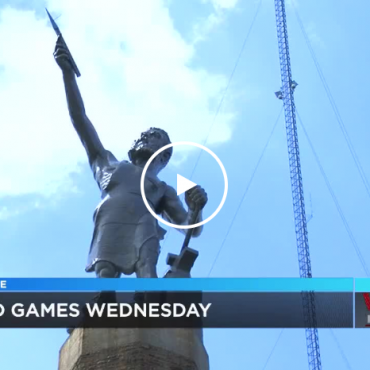 Watch as FOX6 WBRC sits down with Blue Cross and Blue Shield of Alabama to discuss The World Games 2021 and being named the newest Foundation Partner!