New Zealand’s Women’s Rugby team has won ten out of their last twelve tournaments, and it became the first side to qualify for the Rugby 7s at the Tokyo 2020 Olympic Games. It also won the HSBC Rugby Sevens Series in 2019. While the team is full of excellent players, one of the most outstanding players is Michaela Blyde. She plays on the wing and is the leading try scorer in the Series. She has been the 7s Series Player of the Year for the last two years. More than deservedly, she is our Athlete of June 2019!

Michaela Blyde returned after an injury to the New Zealand side in the Canada tournament in May. Their win in the final there meant that New Zealand became the first side to qualify for the 7s at the Tokyo 2020 Olympics. Their playing record after June is that in their last 65 games they have only lost 3. Therefore, Michaela Blyde is the Athlete of the Month not only for her and her team’s accomplishments this spring, but for the entire past year of almost perfect excellence.

In June, in a tournament in France, New Zealand actually lost in the final to the USA. But until that defeat, they had been very impressive with victories such as 44-7 (Scotland), 31-0 (Russia) and 36-0 (China). Their second place in the tournament, however, secured the overall victory of the Series for them. 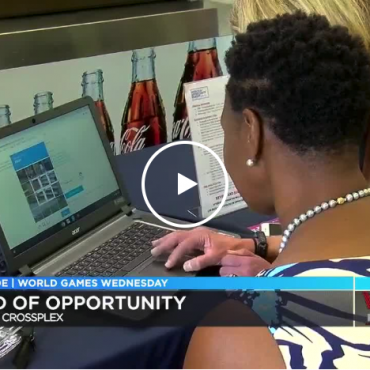 WBRC Covers the World of Opportunity

Take a look at WBRC’s coverage of the World of Opportunity program launch event!