First stop in state is Mobile, with rally at 4:30 p.m. at Bienville Square


BIRMINGHAM, Ala., USA – The American flag that is being carried by veterans and supporters on a 3,100-mile journey across the country to The World Games 2022 in Birmingham will arrive in Alabama on Sunday, June 26 and make its first stop in the state in Mobile.

The flag began its trek to Alabama on May 25 in Washington, D.C., where it flew over the U.S. Capitol before being handed over to veterans who are relaying the flag through 15 states. On July 7, the flag will be carried into the Opening Ceremony of The World Games 2022 (TWG 2022) in Birmingham.

But before the flag gets to Birmingham, Alabamians in several cities and towns will have the opportunity to see it as veterans and supporters run, walk and bike the flag across Alabama.

“The eyes of the world will be on Alabama during The World Games 2022, and we are proud to partner with Airbus and Team Red, White & Blue for the Old Glory Relay,” said TWG 2022 CEO Nick Sellers. “After traveling across the American heartland and the great state of Alabama, it will be an electrifying moment to watch former U.S. Army Sergeant Noah Galloway carry the flag into the Opening Ceremony before a live global audience.”

Athletes from more than 100 countries will compete in exciting and emerging sports from July 7-17 at TWG 2022, which is organized with the support of the International Olympic Committee and takes place every four years. This year marks the 11th edition of The World Games and the first that will be held in the U.S. since 1981.

Team Red, White & Blue (Team RWB) is a nonprofit organization founded in 2010 that supports veterans through their health and wellness journeys by offering real-life and virtual opportunities to build a healthier lifestyle.

“The Old Glory Relay is symbolic of our belief that veterans are our most resilient citizens,” said Mike Erwin, Team RWB Executive Director. “As we pass the American Flag from one supporter to the next over its 3,100-mile journey, we display consistent support that connects thousands of Americans.”

Presenting sponsor Airbus is planning a big welcome celebration for the flag when it arrives in Mobile on Sunday, June 26. Airbus employees, Alabama Power employees and others will gather at Bienville Square in downtown Mobile at 4:30 p.m., to greet the flag and the veterans who will relay it into the city.

“So many Airbus team members proudly served our nation in uniform, so we are especially honored to host this event to show our admiration and support,” said Daryl Taylor, Vice President and General Manager of the Airbus U.S. Manufacturing Facility in Mobile, Alabama. “We invite Alabamians to join us at Bienville Square on Sunday to welcome the flag, honor our veterans and celebrate as Alabama takes its place on the world stage with The World Games 2022.”

The rally in Mobile on Sunday will also include food, beverages and live music.

Below is the complete schedule of towns and cities for the Old Glory Relay from Sunday, June 26 to Thursday, July 7.

Flag crosses the state line into Alabama on U.S. 98 and arrives for a rally at Bienville Square in downtown Mobile at 4:30 p.m.

Flag journeys through downtown Mobile beginning at approximately 7:30 a.m. before traveling through Africatown, Spanish Fort, Loxley and Robertsdale before arriving in Pensacola, Florida., at approximately 4:30 p.m.

Flag will arrive in Andalusia at approximately 5:30 p.m.

Flag will arrive at the State Capitol in Montgomery at approximately 4:30 p.m.

Flag journeys through Elmore, Deatsville, Marbury and Verbena before arriving in Clanton at approximately 5 p.m.

Flag journeys through Columbiana, Chelsea and Argo before arriving in Springville at approximately 5 p.m.

Flag journeys through Madison, Decatur and Moulton before arriving in Haleyville at approximately 4:30 p.m.

Flag journeys through Winfield and Vernon before arriving in Columbus, Mississippi at approximately 6:30 p.m.

Flag journeys through Pickensville and Carrollton before arriving in Tuscaloosa at approximately 6 p.m.

Flag will arrive in Hoover at approximately 1 p.m. and then journey through Vestavia Hills and Homewood before arriving in Birmingham between 4:30 – 6 p.m.

Flag is carried into The World Games 2022 Opening Ceremony presented by Alabama Power at 8 p.m.

Airbus pioneers sustainable aerospace for a safe and united world. The Company constantly innovates to provide efficient and technologically-advanced solutions in aerospace, defense, and connected services. In commercial aircraft, Airbus offers modern and fuel-efficient airliners and associated services. Airbus is also a European leader in defense and security and one of the world’s leading space businesses. In helicopters, Airbus provides the most efficient civil and military rotorcraft solutions and services worldwide. 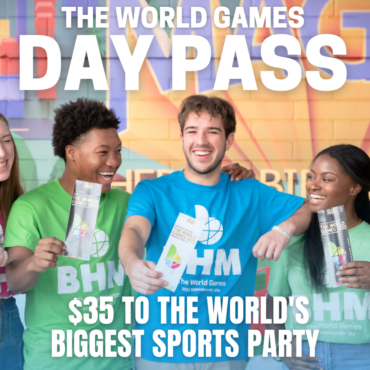