Aerobic gymnasts mix it up to develop their sport

On the eve of the 15th Aerobic Gymnastics World Championships in Guimarães (POR), athletes from more than 30 nations sat down to share ideas and address issues with one goal in mind: further developing the sport of Aerobic Gymnastics.

Dóra Hegyi (HUN), who has been the Athletes’ Representative for Aerobic Gymnastics on the FIG Athletes’ Commission since 2016, led the meeting at the Pavilhão Multiusos de Guimarães, where competition began Friday. Hegyi was delighted with both the turnout Thursday evening and the effort from the gymnasts, who interrupted their intensive preparation for these World Championships to share ideas on the sport’s future.

“It was really successful,” she said of the hour-long meeting that drew more than 70 athletes. “This time I wanted to make it a little bit different, not like a normal athletes meeting where only I speak and sometimes they raise their hands. We need really big changes in our future to be more attractive.”

FIG President Morinari Watanabe (JPN) opened the meeting by addressing the athletes, asking for honest feedback in an “open and productive” manner.

“The most important thing for the FIG is the gymnasts,” he said. “The FIG will support the gymnasts and listen to your opinions with the aim of developing Aerobic Gymnastics.”

“We need to hear your voice,” she told the athletes.

The FIG officials exited to allow the athletes to speak together in a relaxed format for the duration of the session. Hegyi addressed issues and then divided the participants up into 10 groups to brainstorm ideas that were recorded on double-sided forms.

“I mixed them up into groups, not grouped together as nations, but individuals… Italy, Greece, Germany, Bulgaria, totally mixed,” she said. “They were working together and came up with many, many, many ideas. This is what I wanted to achieve, the athletes communicating with each other.”

Hegyi, 27, retired in 2017 after a highly successful career that included silver medals in the Mixed Pairs event (with Dániel Bali) at the 2017 World Games in Wroclaw (POL) and 2016 World Championships in Incheon (KOR), the Group gold at the 2015 European Games in Baku (AZE), and multiple medals at the European Championships. As the Athlete Representative, she also sits on the TC, which is responsible for the sport’s rules and Code of Points.

“We as a TC are trying to find our way, the best possible way, to improve,” she said.

Hegyi said she is working hard to ensure the same camaraderie she witnessed from the athletes is also felt among the athletes, TC and FIG officials.

“This is a very important point of competition, to be humans and to support each other,” she said. “I want to do the same with the Technical Committee. Before it was like the TC, the FIG and the athletes, and it was three totally different points, three totally different languages. Now we are close to speaking the same language. I’m really happy for that.” 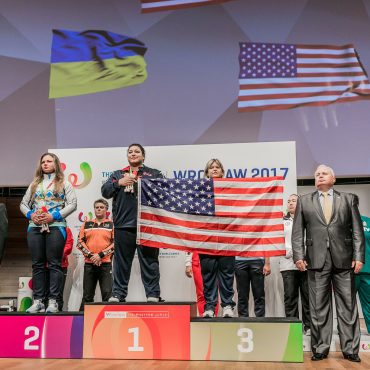 HUGE UPGRADE FOR POWERLIFTING AT THE WORLD GAMES 2021

Gaston Parage IPF President During the SportAccord Convention 2018 in Bangkok/Thailand, the IWGA held also it’s annual General Assembly, where they also reported about the last World Games 2017 in [...]