Final preparations are underway in Shenzhen, China for the 1st FAI World Drone Racing Championships, which start on Thursday 1 November.

Some 128 competitors, including 44 Juniors and 13 women, from 34 countries have arrived in China’s number-one tech city for the competition, which lasts four days.

Alongside the drone pilots, there are 34 team managers, plus 72 extra helpers and 40 official supporters.

The track is one of the biggest ever built in drone racing competition, and takes pride of place in the centre of the Shenzhen Universiade Center – Stadium. Built in the shape of a traditional Chinese knot, the 650m race track covers three levels with a height difference of six metres.

“The track is looking like a million dollars,” he said. The whole event is “certainly on a larger scale” and that means there have been challenges, in particular working in both Chinese and English, “but these are challenges that we relish”.

FAI Global Technical Partner Noosphere was getting to grips with some of those technical challenges, including finalising the event management and scoring software, while out on the track itself pilots were taking in the sheer scale of the competition venue here in Shenzhen.

Four members of the five-strong Team USA were watching final preparations being made to the course.

Jessika Farrar, 31, said she was “loving China”. “It’s been an amazing experience already,” she said. “We’ve been here two days, and we’ve been lucky enough to tour some drone factories. They’ve been so hospitable.”

She added: “I’m looking forward to this track. It’s something else. There is no comparison with anything I’ve flown before!”

Team mate Bill Schuette, 21, also said the track compared to “nothing else”. To prepare to fly it he has been flying his drone with an added GoPro digital camera.

Pilots at the competition will flying with a dedicated digital camera from DJI to allow for live-streaming, which will add weight to their drones.

“Getting used to the weight is really important,” Schuette explained. “For a race like this I start to ramp it up during the season. I actually spend a lot of my time designing and building, but when it comes to a big event I’ll start training a lot more often. I try to fly every day a week ahead of time.”

Christopher Hartman, 16, meanwhile, said he had been working on making his drone fly reliably. “I have been practising as much as I can, going to as many races as I can and getting the nerves down to prepare for a big scale race like this.”

Kevin Mead, 30, has also been enjoying China. “I arrived Monday. China is good, really different from Ohio! Shenzhen is such a huge city and a lot of people.”

Like his team mates, Mead has been preparing for the competition by flying as much as possible. “I have a couple of acres where I fly in my own backyard, and I have friends that set up tracks,” he said.

“I’ve been flying every day, getting used to the quad. The track is really different from what I’m used to, so we’ll see.” 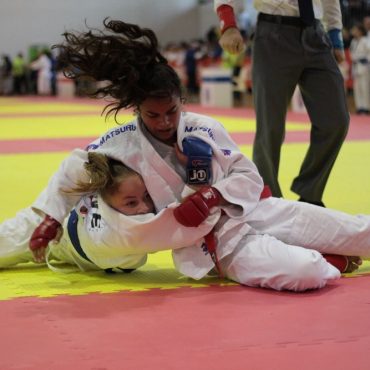 The 2018 European Championship (U18 &U21) was a complete success! 694 registered athletes representing 24 European Federation with thousands of spectator who came to watch and witness the spirit of [...]