In a result which underlines the ever-increasing global profile and popularity of Acrobatic Gymnastics, two-time mixed pair world champions Marina Chernova and Georgii Pataraia have won a tightly contested public vote to become the IWGA’s Athletes of the Year 2018.

Russian stars Marina Chernova and Georgii Pataraia have won the lot in Acrobatic Gymnastics but their latest triumph may just be one of the most significant of their careers. On Friday the duo added the title of International World Games Association (IWGA) Athletes of Year 2018 to their already bulging trophy cabinet.

Almost 160,000 members of the public voted for Chernova and Pataraia on the IWGA website lifting them above leading figures from a wide range of sports including karate, sport climbing, handball and powerlifting.

The winners of mixed pair gold at the 2015 European Games, the 2017 European Championships, the 2017 World Games and the 2016 and 2018 World Championships were among 25 athletes and teams nominated by the IWGA for the award. The field was whittled down to a final 10 in mid-January with the public then given a further two weeks to vote for their favourites.

On the back no doubt of their extraordinary grace, power and beauty Chernova and Pataraia finished 6,483 votes ahead of the 10-time International Powerlifting Federation (IPF) world champion Jennifer Thompson (USA) with kickboxing star Orfan Sananzade (UKR) in third.

Chernova was quick to acknowledge that her and Pataraia’s performances at the 2018 Acrobatic Gymnastics World Championships in Antwerp, Belgium were a defining moment for the pair, and perhaps for the sport at large.

“We performed elements in the competition that only we do,” said Chernova, underlining the way in which she and Pataraia have elevated the sport to new heights. “There was a great atmosphere (in Antwerp), the gym was perfect, the arena was full of loud fans and we executed all of our most difficult elements.”

They certainly did. The Russians won their second consecutive world gold by a margin of 1.310 points by performing a final routine with a difficulty rating of more than half a point higher than any of their rivals. Long-time rival Artur Beliakou (BLR) perhaps summed it up best at the time.

“It’s very hard work what they do, it’s very impressive,” Beliakou said in Antwerp. “We will have to upgrade our difficulty two times or three times more to beat them.”

While Chernova praises her partner as being “strong, hardworking and reliable”, the modest Pataraia points straight back at the 22-year-old as being the star not only of their partnership but of the sport in general.

“She is the best of the best,” Pataraia said simply.

The man has a point. In Antwerp last year Chernova became the first gymnast in the 44-year history of the Acrobatic World Championships to ever win three mixed pair gold medals – having also won the 2014 title with her previous partner, Revaz Gurgenidze.

FIG Acrobatic Gymnastics Technical Committee President Rosy Taeymans (BEL) is well aware that in Chernova and Pataraia she has a highly precious commodity.

“This result proves that we have a great, exciting and beautiful sport and a great global following,” Taeymans said on Friday. “I am very proud that their outstanding achievements have been recognised on the world stage. It is an unbelievable achievement to be crowned The World Games Athletes of the Year.”

The slightly worrying news for all of Chernova and Pataraia’s rivals is that the triumphant duo have no intention of seeing their winning streak come to an end any time soon.

“Acro is our life,” Chernova said. “We work constantly and train twice a day. We want to win every competition.” 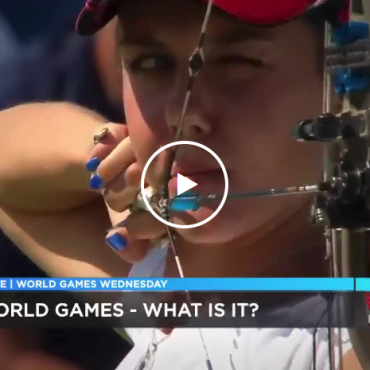 Starting in January, WBRC FOX6 will host “The World Games Wednesdays,” a monthly segment updating the Birmingham community on The World Games. Check out this month’s segment: