HUGE UPGRADE FOR POWERLIFTING AT THE WORLD GAMES 2021

During the SportAccord Convention 2018 in Bangkok/Thailand, the IWGA held also it’s annual General Assembly, where they also reported about the
last World Games 2017 in Wroclaw.
The powerlifting events were one of the prime events and the venue was 3 days full packed with enthusiastic spectators. On the platform there were exceptional
battles for medals and honour.
This was also well recognised by the IWGA officials and therefore they granted the IPF an „upgrade“ of lifters for the upcoming World Games 2021 in Birmingham/USA.
The number of athletes will rise from 80 to 96 which is an increasement of 20%.

As IPF President I am very proud of this as, it also reflects the good work we did over the last 3 editions of the World Games to bring the powerlifting event from one edition
to the other one on a new level.
This shows also that we are not settled after having once good games. Even more it is always an assignment and motivation for us to improve our standards
for the next edition. With the additional 16 slots for Birmingham we have now the proof of this good and still ongoing evolution in the IPF.
The IPF delegation at SportAccord consisting of myself, Robert Keller and the World Games Competition Manager Emanuel Scheiber had also a first meeting with the organising team from
Birmingham. Also this was a very constructive meeting. The Birmingham representatives are very excited about the powerlifting events at the WG21 and they told us that powerlifting will be definitively again
a prime event.
In October this year will be the first Competition Manager Meeting in Birmingham and after this meeting we will have of course an update about the games and we will for sure keep all of you informed.

With these really great perspective to the next World Games, we start now with all preparations and promotion to
guarantee our lifters, coaches and fans the best powerlifting events at the World Games ever! 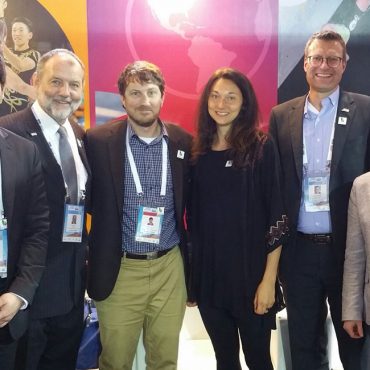 JÖRN VERLEGER Very good news for fistball at the SportAccord Convention in Bangkok (THA): The International World Games Association (IWGA) decided to run a women’s competition with six teams and [...]