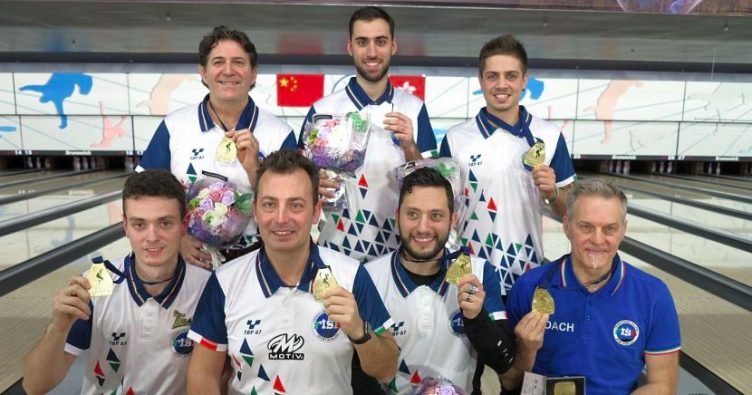 The team finals were played in Baker format where each player plays two frames per game. The lead off player bowls the first and sixth frame, the second player the second and seventh frame and so on.

The young Singaporean team (pictured left) featuring Basil Ng, Keith Saw, Jonovan Neo, Darren Ong, Jaris Goh and no. 6 Joel Tan, who secured their spot in the medal round in the last frame of the preliminaries, scored only two doubles in the whole match and both came in the 10th frame.

By finishing the Team preliminaries in third place, Marco Reviglio, Pierpaolo De Filippi, Erik Davolio, Nicola Pongolini and Antonino Fiorentino and no. 6 Marco Parapini had secured the first medal for Italy at a World Championship since 47 years (1971, bronze in Team event).

As the higher seeded team, Canada had chosen to start on the left lane (#35), but all three games saw the team on the right lane (#36) as the winner. In the first game, Italy trailed by 23 pins in the seventh frame, but Davolio, Pongolini and Fiorentino struck in frames 8 to 10 for a 176-162 come-from-behind victory.

Tides turned when the Italians were on the left lane. The Canadians struck on seven of their first eight shots to take a 69-pin lead in the sixth frame. Though the Italians closed with six consecutive strikes, Canada leveled the match with 244-210 win.

In the decider, the Canadians failed to double in the entire game, but stayed clean for the first three game. On the Italian side, Pongolini, Fiorentino and Reviglio tossed a turkey in frames 4 to 6, but a split by De Filippi in the seventh, which resulted in an open frame, gave the advantage back, as Italians led by mere 10 pins heading into the final frame.

As both anchors, MacLelland and Fiorentino, suffered splits and were unable to convert them, Italy, won the game, 190-179 and the match, 2-1.

In the gold medal match, USA decided to start on the left lane. Both teams doubled in the first half of the first game, Anderson and Tackett on the U.S. side and Pongolini and Fiorentino for Italy. An open frame by Barnes (2-8) gave the Italians a six-pin lead which they widened to 17 pins as Anderson opened in the eighth (6-10).

While Pongolini opened in the ninth frame, Tackett tossed a strike to give anchor Jones the chance to shut out Italy with a double and a seven-count. Instead of a strike, Jones left the big four (4-6-7-10) to hand the first game to Italy.

Italy started the second game with a double and five consecutive spares to pull away. Team USA was unable to double in the whole game and made two more mistakes in the sixth and 10th frame.

Davolio and Pongolini scored another double in the 8th and 9th frame to give Fiorentino the chance to shut out the Americans with an 8-count on his first shot in the 10th frame.

Fiorentino sealed the victory with 9-spare-8 and the celebration began as the World Championships are over for the Italians. Earlier on Tuesday, Pongolini and Fiorentino got eliminated in Masters Round of 24.

The Championships is contested on the 38-foot Los Angeles pattern from the current World Bowling library of lane conditioning patterns.

Bowlingdigital will provide on-site coverage of the 2018 World Men Championships featuring reports, results and photos commencing with the 2018 World Bowling Coaching Conference “Youth Development and Coaching” at the Hong Kong Sports Institute Nov. 20-21, followed by the Opening Ceremonies (Nov. 24), the preliminaries in Singles, Doubles, Trios (Nov. 24-30), the Team preliminaries (Dec. 1-4), during which the Singles and Doubles Finals will be contested, followed by the Trios and Team Finals, all the way through to the Masters finals (Dec. 4-5). 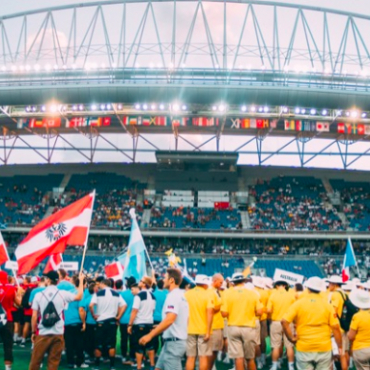 FOR IMMEDIATE RELEASE New York, NY – The Federation of International Lacrosse (FIL) is pleased to announce and expresses its appreciation to the Executive Board of the International Olympic Committee (IOC) for [...]