PARKOUR IS SOLD OUT FOR JULY 10

Gymnastics is a sport that requires balance, strength, flexibility, agility, coordination and endurance. There are six disciplines of Gymnastics offered in The World Games: Acrobatic, Aerobic, Parkour, Rhythmic, Trampoline and Tumbling.

Acrobatic has 5 categories: Men’s Pairs, Women’s Pairs, Mixed Pairs, Women’s Group (3 gymnasts) and Men’s Group (4 gymnasts). The pairs/groups present a routine with music which includes a certain number of required collective (partnership) and individual elements of three different types: static (balance), dynamic, and combined. The static routine must include balanced pyramidal constructions held for three seconds and other elements of strength, flexibility and agility. The dynamic exercise is meant to show flight elements such as throws, pitches and catches as well as dynamic tumbling elements. There are three evaluation criteria: difficulty, execution and artistry. The difficulty score of a routine is the final amount of values existing for each element in the FIG Code of Points. The execution judges evaluate the correct form and technical execution of these elements. The artistry judges consider the overall impression of the choreographed routine following criteria such as musical interpretation, structure of the exercise and execution of the choreography, as well as the presentation of the athletes. In the finals, each pair/group perform one single exercise which includes both balance and dynamic elements.

Aerobic is the ability to perform continuous complex and high intensity movement patterns to music. This sport originated from traditional aerobic exercises, as the routine must demonstrate continuous movement, flexibility, strength and the utilization of the seven basic steps. The winning routine must show clean and balanced movements with perfect technique. The routine should include at least one element from the four element families which present dynamic strength, static strength, jumps/leaps, and flexibility/balance. Overall, the routine features a maximum of 12 elements. The competitor must also demonstrate combinations of aerobic movement patterns with arms and feet, including the seven basic aerobic steps: March, Jog, Skip, Knee Lift, Kick, Jack and Lunge. Gymnastic elements like saltos or handstands are prohibited.

Rhythmic Gymnastics is practiced exclusively by women. This discipline includes five apparatus: Rope, Hoop, Ball, Clubs, and Ribbon. However, only four of these are used in a competition cycle. In competition, individual gymnasts present four exercises corresponding to the four authorized apparatus. The apparatus must remain in motion for the duration of the exercise. Movements must vary in form, magnitude, direction, level and speed. The apparatus must be handled in a variety of ways and may not be used as a decorative accessory. There must be an ongoing relationship between the gymnast and the apparatus. The composition of an exercise is based on certain basic body group movements (leaps, pivots, balance and flexibility) as well as technical groups.

Parkour is a training discipline using movement. Athletes aim to get from one point to another in a complex environment without assistive equipment and in the fastest and most efficient way possible. Moves include running, climbing, swinging, vaulting, jumping, rolling, crawling and other movements deemed suitable for the situation. The World Games 2022 will feature the Speed event, where athletes must overcome obstacles as quickly as possible to reach the finish line in the quickest time.

Trampoline involves athletes performing acrobatics while bouncing on a trampoline. The Double Mini trampoline is smaller than a regular competition trampoline. The gymnasts run, jump onto the sloping end, jump onto a flat plateau, then dismount on to a mat. Skills are performed during the jumps or during the dismount. The form and difficulty are judged in a similar manner as trampolining, but there are additional deductions for failing to land cleanly or landing outside a designated area on the mat.

Tumbling is characterized by the complex, swift, and rhythmical succession of acrobatic jumps from hands to feet, feet to hands or feet directly back onto feet in a matter of 6 seconds and on a 25-meter track. Tumbling is a colorful sport that offers spectacular elements such as speed, rhythm and twists. A routine includes 8 skills, with the final skill requiring athletes to land on a landing mat (placed at the end of tumbling track). Each routine is valuated in “execution” and “difficulty”. 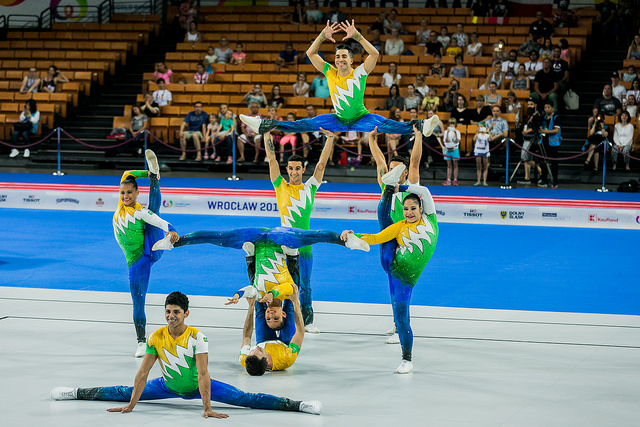 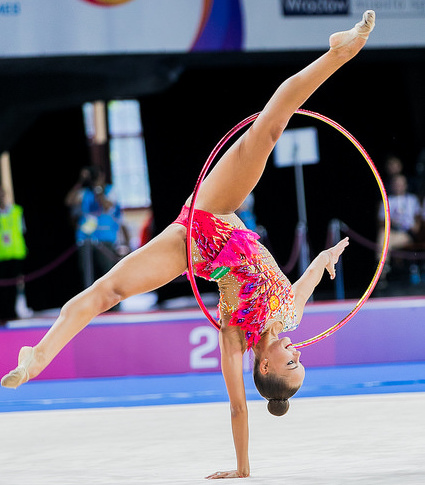 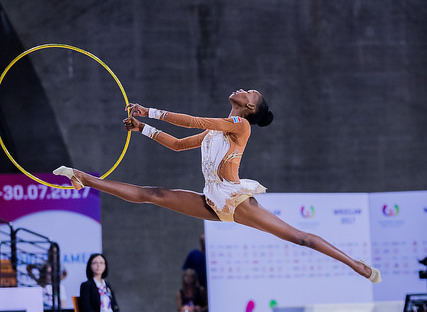 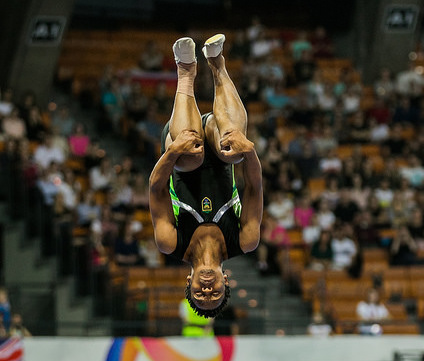 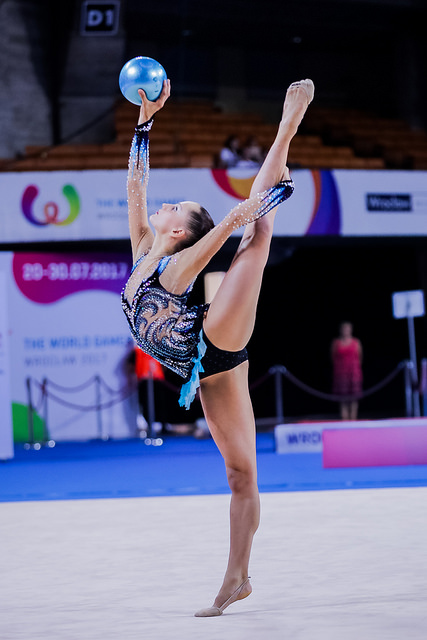 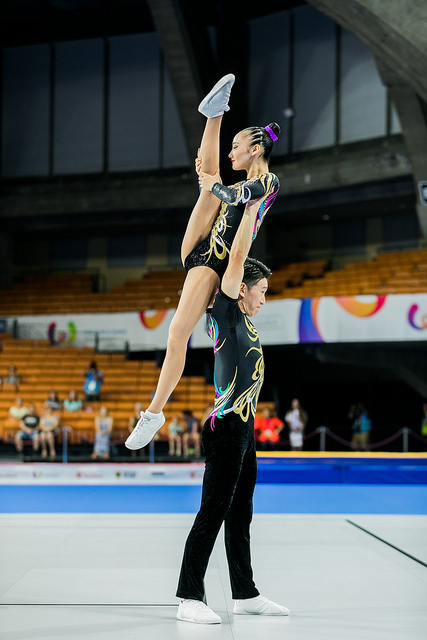 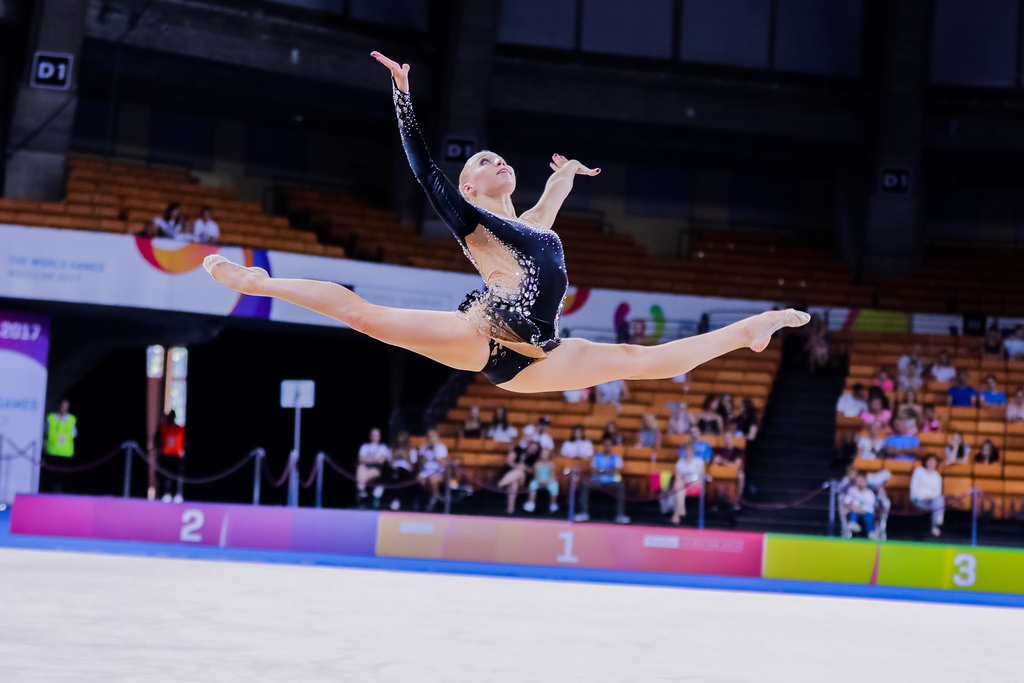